This Advent, our blog posts will reflect on ‘prophetic voices’; people who, in the spirit of the prophets, may inspire us to action, challenge our preconceptions, refocus our religious practices, or forge a new path forward for our communities. 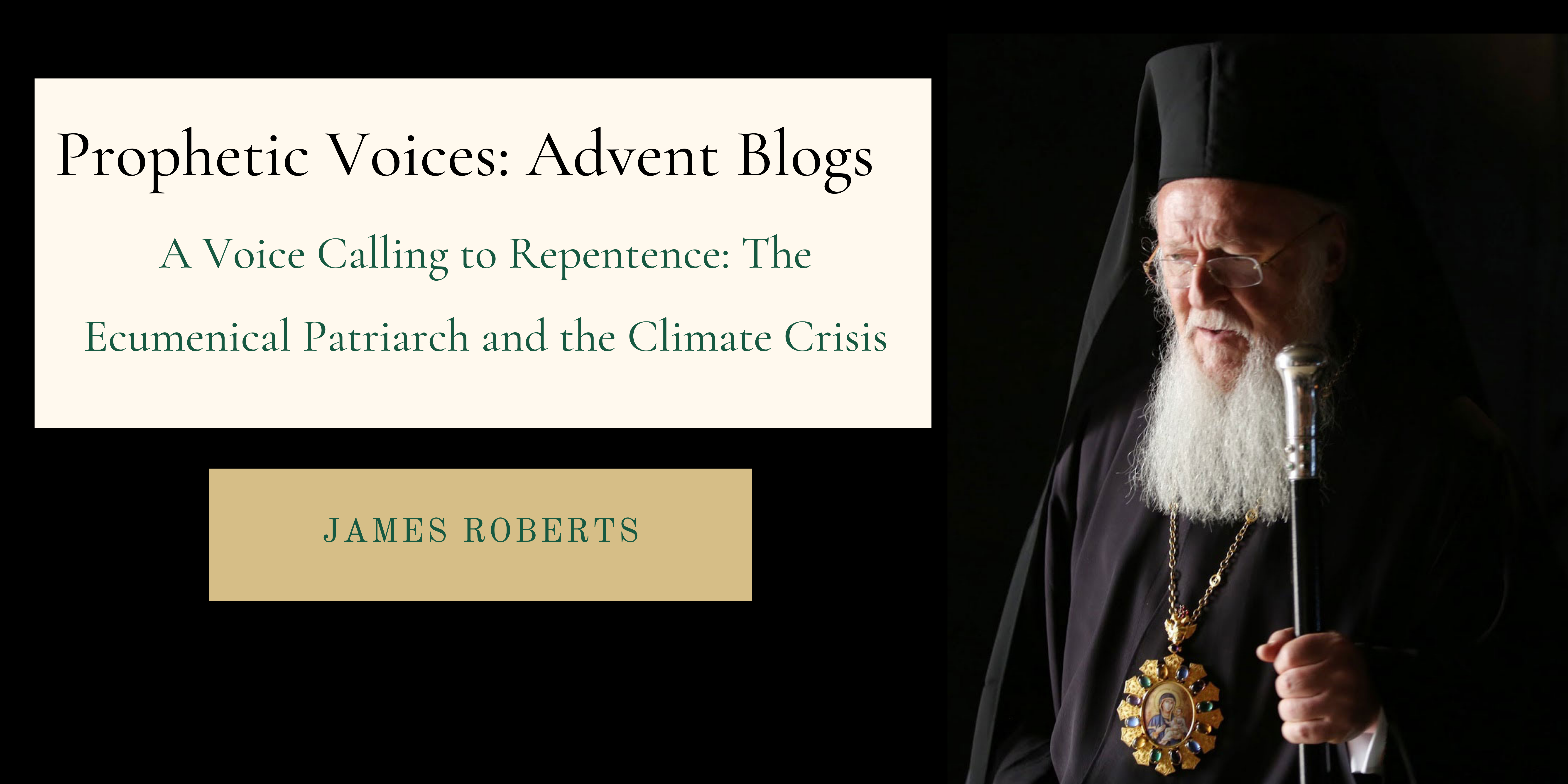 A Voice Calling to Repentance: The Ecumenical Patriarch and the Climate Crisis

Within the Christian imagination, prophets are often perceived as marginal figures; voices crying from the wilderness, like John the Baptist in the desert. We can sometimes regard prophets as being disconnected from institutions and society, challenging normative ethics and behaviour from a slight remove. These figures are vitally important. However, not all prophetic voices fall into this category.  Figures who hold centralised institutional positions of authority and responsibility can also be global prophetic figures. This can be particularly true when those in power take a bold stance on particular issues, calling for change. One such figure, I suggest, is His All Holiness, Patriarch Bartholomew I, the Ecumenical Patriarch in the Orthodox Church. Patriarch Bartholomew has been campaigning for decades on what is now, undoubtedly, one of the most pressing issues for our society and indeed the whole globe, the climate crisis. Patriarch Bartholomew’s work in this area has resulted in him receiving the epithet of ‘Green Patriarch’. Importantly, the Ecumenical Patriarch provides a religious perspective on the climate crisis, giving voice to people of faith to act, motivated by their spirituality. His work and thought speak not only to Christians, but to people of all faiths, scientists, and those engaging in climate work. His example shows that it should not be revolutionary for religious leaders to call for better care of creation, but in fact, it is central to the life of faith.

Bartholomew I of Constantinople was born in 1949 on the island of Imbros in Turkey and named Dimitrios Arhondonis. In 1961 he was ordained into the Diaconate and took the name Bartholomew. He would later go on to be ordained Priest in 1969, then Metropolitan of Philadelphia (in Asia Minor), Metropolitan of Chalcedon, and in October 1991 he was elected as the 270th Archbishop of Constantinople, New Rome, and Ecumenical Patriarch. The Ecumenical Patriarch is recognised as the ‘first among equals’ within the autocephalous churches in the Orthodox Church and in Orthodox tradition is the apostolic successor to Saint Andrew (who is also Patron Saint of Scotland, whose feast day was celebrated this week on 30th November).

Climate work began early in this role. In 1994, soon after becoming the Ecumenical Patriarch, Patriarch Bartholomew established the Religious and Scientific Committee – a dialogue forum between Christians of various denominations, other faiths, and scientists, to discuss environmental issues. Since the 1990s, he has been building bridges between religious and scientific communities, raising awareness about climate change, pollution, species extinctions and habitat loss. He established a day for the protection of the environment on 1st September every year and is now recognised globally as one of the foremost spiritual leaders on climate and environmental issues.

Almost 30 years after the Ecumenical Patriarch formally began this work, concern around the climate crisis is finally entering into greater public consciousness. This is largely due to the powerful actions of young prophetic voices, such as Vanessa Nakate, Greta Thunberg, and many others across the globe.  At COP26, we heard the inspiring words of climate activists, pressing global leaders for greater change. Religious leaders also gathered at COP26, and in the weeks preceding it, giving voice to the spiritual and moral imperative to take action.

It is in this area that Patriarch Bartholomew has also had a significant impact. In his writings, he has expounded the theological foundations for caring for the environment and responding to the climate crisis. He writes that concern for the climate is not just an issue for scientists and politicians to engage with or solve but it is fundamentally a theological issue, as John Chryssavgis points out:

‘The environment is not only a political or a technological issue; it is, as Bartholomew likes to underline, primarily a religious and spiritual issue. Religion has a key role to play; a spirituality that remains uninvolved with outward creation is uninvolved with the inward mystery too.’ (1)

In light of this, one of the ways in which Patriarch Bartholomew highlights the theological underpinnings of the climate crisis is through reference to sin. He writes clearly and emphatically that abusing our natural environment is a sin. Like a prophetic figure, Patriarch Bartholomew issued a call to repentance in the following words from November 1997:

The reason that this is sinful is highlighted in a more recent document entitled ‘For the Life of the World: Toward a Social Ethos of the Orthodox Church’, which received patriarchal endorsement from the Ecumenical Patriarch. Here, we read how the earth is ‘…a sacred mystery whose depths reach down into the eternal counsels of its maker’ and, as God’s creation, cannot be mastered by human arrogance. As well as this, the document also highlights the interconnectivity of persons on this earth. No person lives in isolation, but we are intimately connected with our environment and with our neighbours. Mistreating the environment harms this cosmic communion:

‘None of us exists in isolation from the whole of humanity, or from the totality of creation. We are dependent creatures, creatures ever in communion, and hence we are also morally responsible not only for ourselves or for those whom we immediately influence or affect, but for the whole of the created order—the whole city of the cosmos, so to speak. In our own time, especially, we must understand that serving our neighbor and preserving the natural environment are intimately and inseparably connected.’ (3)

For decades, His All Holiness, Patriarch Bartholomew has been calling for repentance over our sinful treatment of the natural environment. Not only does our mistreatment of the world undermine our recognition that the earth is God’s creation, but it also highlights our failure to love our neighbours; many of whom are exponentially disadvantaged by climate change and its associated economic, environmental, and social problems. The Patriarch’s call to repentance is coupled with a call to action as Christians, and people of all faiths, are implored to reflect on our relationship with God, our neighbours, and the natural world. The Ecumenical Patriarch’s prophetic voice is a vital one on an issue which has been overlooked for too long.

(3) ‘For the Life of the World: Toward a Social Ethos of the Orthodox Church’ https://www.goarch.org/social-ethos?fbclid=IwAR2RSPrgYRhPfAgT9p2iIQkd9wqtOYJ74Gtjnpmyq9xYdxshwqr6U1FJFiY