'Race in Religion' Tour at the Jewish Museum

The relationships between Black and Jewish people have long been a topic of academic research, political interest and disputed public discourse. This year the Jewish Museum’s ‘Race in Religion’ tour was an enlightening glimpse into these multiplicities and complex histories for CCJ staff. Biblical and Talmudic discussions of race, historical allyship, and a guided exhibition of selected objects were nuanced and thought-provoking.

The Museum drew attention the community of Black Jews in Britain, as well as the journey of ancient Ethiopian and modern Ugandan Jewish communities, the Beit Israel and the Abayudaya, respectively. 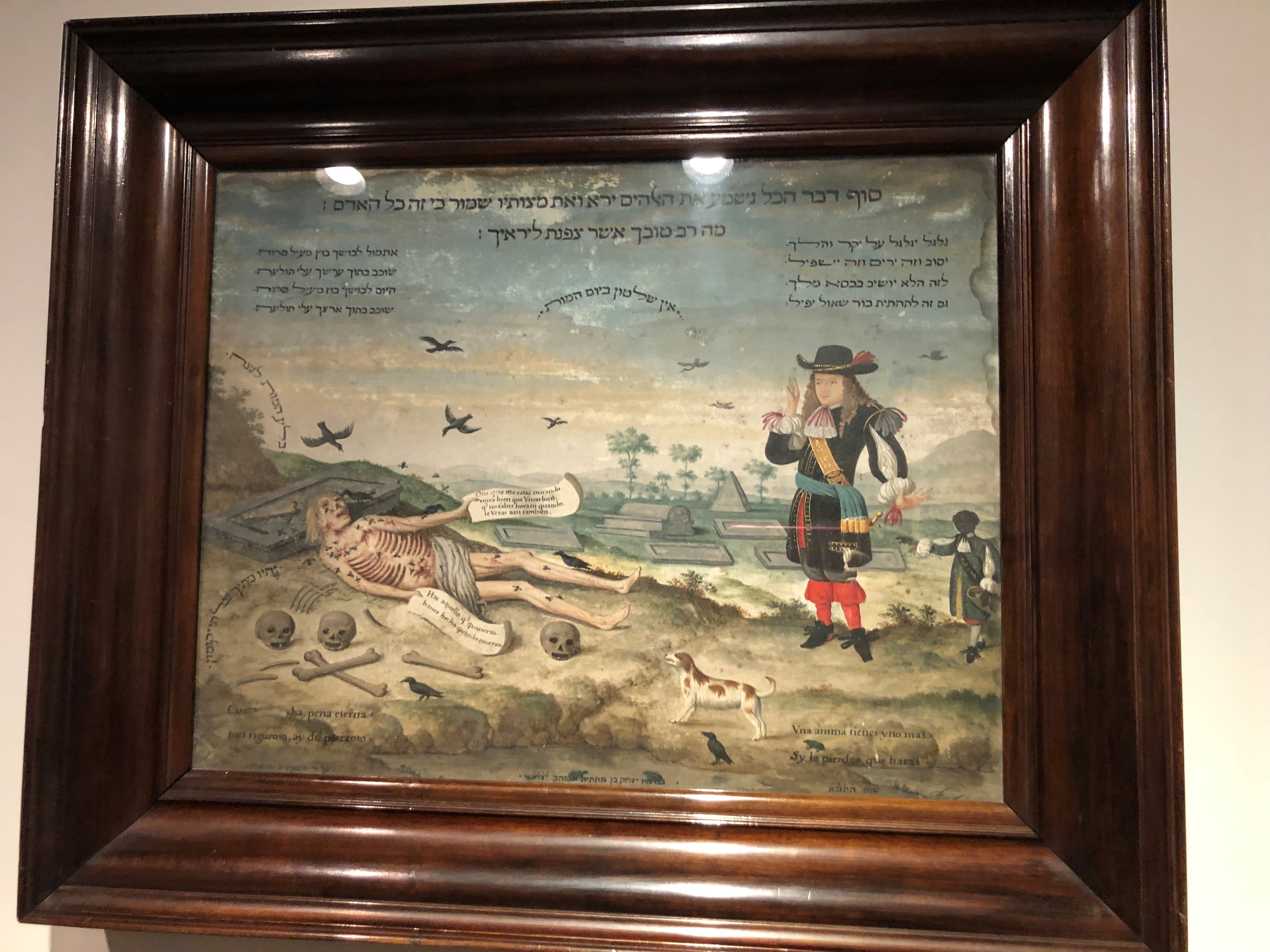 One painting shown to the audience was a Dutch rendition of ‘Momento Mori’. In the tradition of reminding a gloating power of their own mortality, the painting is the first of its kind to be painted by a Jewish artist. Spanish, Hebrew, and Latin all appear in the image testifying to the hybridity of the Jewish experience and the legacy of expulsion and resettlement which produced its creator’s circumstances. In it, a Black man is featured behind a White man, in smaller stature, but in identical European dress. While the White figure shields his face from the corpse before him, the Black man behind points directly at this symbol of death. Within the painting is contained a Talmudic mythology. Drawn from a passage in Sanhedrin 108b. Three subsidiary-seeming beings are featured; the small Black man, the raven, and the dog, all of whom are accused of transgressing the prohibition of sexual relations on Noah’s ark. This story, and its biblical fallout - including the curse of Canaan, son of Cham - is a founding text for racism in Jewish and Christian traditions alike. The complexity of the image, its relationship with European Transatlantic slave traders, Dutch Sephardic Jews, Talmud and bible all combine to exhibit a fascinating piece of history, a depiction of intersecting and conflicting identity. 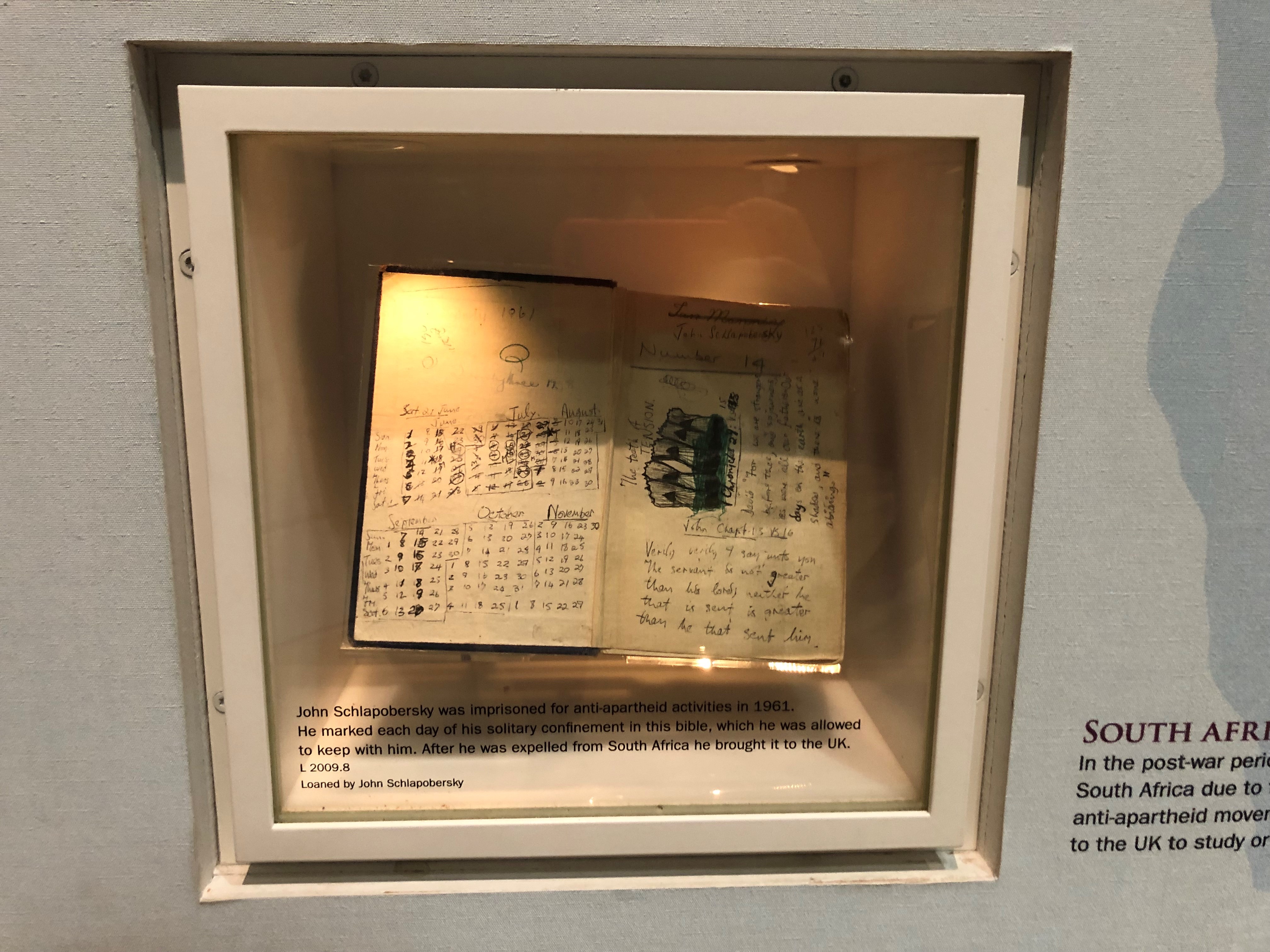 The tour also included seeing John Schlapobersky’s bible and his many notes written inside the front cover. This bible was used by Schlapobersky while in prison in South Africa for opposing apartheid. Alongside his count of the days he has been imprisoned, Schlapobersky wrote some Bible references that were important to him, including Numbers 14. In this chapter the Israelites in the wilderness are wishing they had stayed in Egypt. Perhaps this passage was inspirational to Schlapobersky because it shows that despite present hardships- for Schlapobersky and the Israelites- things could not go back to the way they were with one group holding power over another.

The focus on allyship within the tour showed the way Jews have used their experience as minorities to stand with those being persecuted. From opposing apartheid in South Africa to fighting for civil rights in America the tour demonstrated the ways Jews have been active for racial justice.