This week we marked the yahrzeit (anniversary of death) of former CCJ President Rabbi Lord Jonathan Sacks - a pillar of the Jewish community, a cornerstone of interfaith and a paragon of cross-communal and interpersonal responsibility. Jonathan Sacks was respected among and beyond the society he served as a prolific writer, spokesperson, and faith leader. CCJ mourns the loss of a distinguished voice of interfaith friendship and initiative. We mark the commitment to his legacy with words from voices of faith and tributes of those who knew and admired him.

Within Jewish communities Jonathan Sacks was not simply a household name, but a household bookshelf. However, as Chief Rabbi Ephraim Mirvis described, he was above all “an extraordinary ambassador for Judaism” whose “remarkable legacy will live on in the hearts and minds of the countless people he inspired” across boundaries of faith.

Moreover, as a man of deeds, as well as famously eloquent words, Jonathan Sacks was also eulogised by charities. World Jewish Relief, whose President Henry Grunwald paid tribute, saying “… he understood exactly what World Jewish Relief stands for. He endorsed our view that all of our work, whether within or without Jewish communities world-wide, was "Jewish" - an essential part of what being Jewish means… His death adds to the responsibility we all have to ensure that his works live on after him."

Across worlds of faith, politics, and moral philosophy, Rabbi Lord Sacks excelled and carved out a unique space for his deeply spiritual, urgent, and collected message of hope. As CCJ Chair Bishop Michael Ipgrave writes “Inter faith relations were for him not at all to do with the amalgamation of differing viewpoints into a negotiated compromise, but rather the recognition of wisdom in many and varied religions, and its pressing into service in the quest for the common good.” Rabbi Sacks’ hope was as broad as humanity itself, and, as the Board of Deputies president Marie van der Zyl described, he appeared a “giant of both the Jewish community and wider society”. Not only did Sacks’ philosophy effect the globe, but the faith from which it emanated animated his person and thought. Archbishop of Canterbury Justin Welby articulated his gratitude by expressing that, “He devoted so much of his life to reflecting on God at the most profound level – and we are all the beneficiaries of his wisdom.”

For Bob Fyffe, General Secretary of Churches Together in Britain and Ireland “Lord Sacks was an inspirational leader, whose gentle manner and scholarly insights enriched the conversation about how people of faith can be a source for good in society, especially if they act together.” The Archbishop of Westminster, Cardinal Vincent Nichols echoed this messaged when he paid respect to Rabbi Sacks; “I recall with clarity some of his forceful and persuasive presentations of the truths expressed in Judaism and indeed in the Christian faith, truths which help us to make sense of our lives, our communities and our destinies.” Rowan Williams’ touching tribute, to a close contemporary and great friend, testified to the warmth and intellect of Jonathan Sacks, a force for change and upstanding leadership who is sorely missed.

Pictured below is Rabbi Lord Sacks receiving the CCJ Bridge Award in 2018. 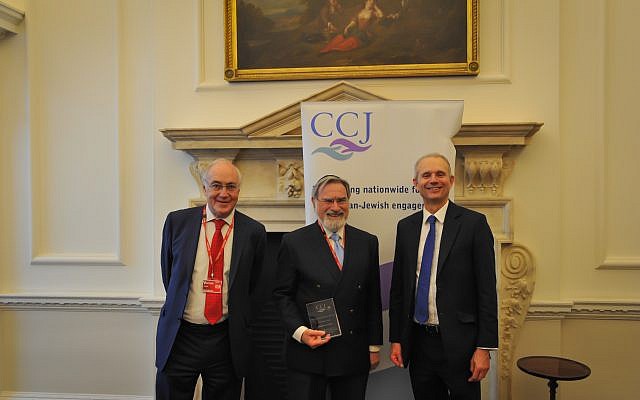