Remember, Repent, Rebuild: Words from the Service of Repentance and Commitment on the Occasion of the 800th Anniversary of the Synod of Oxford 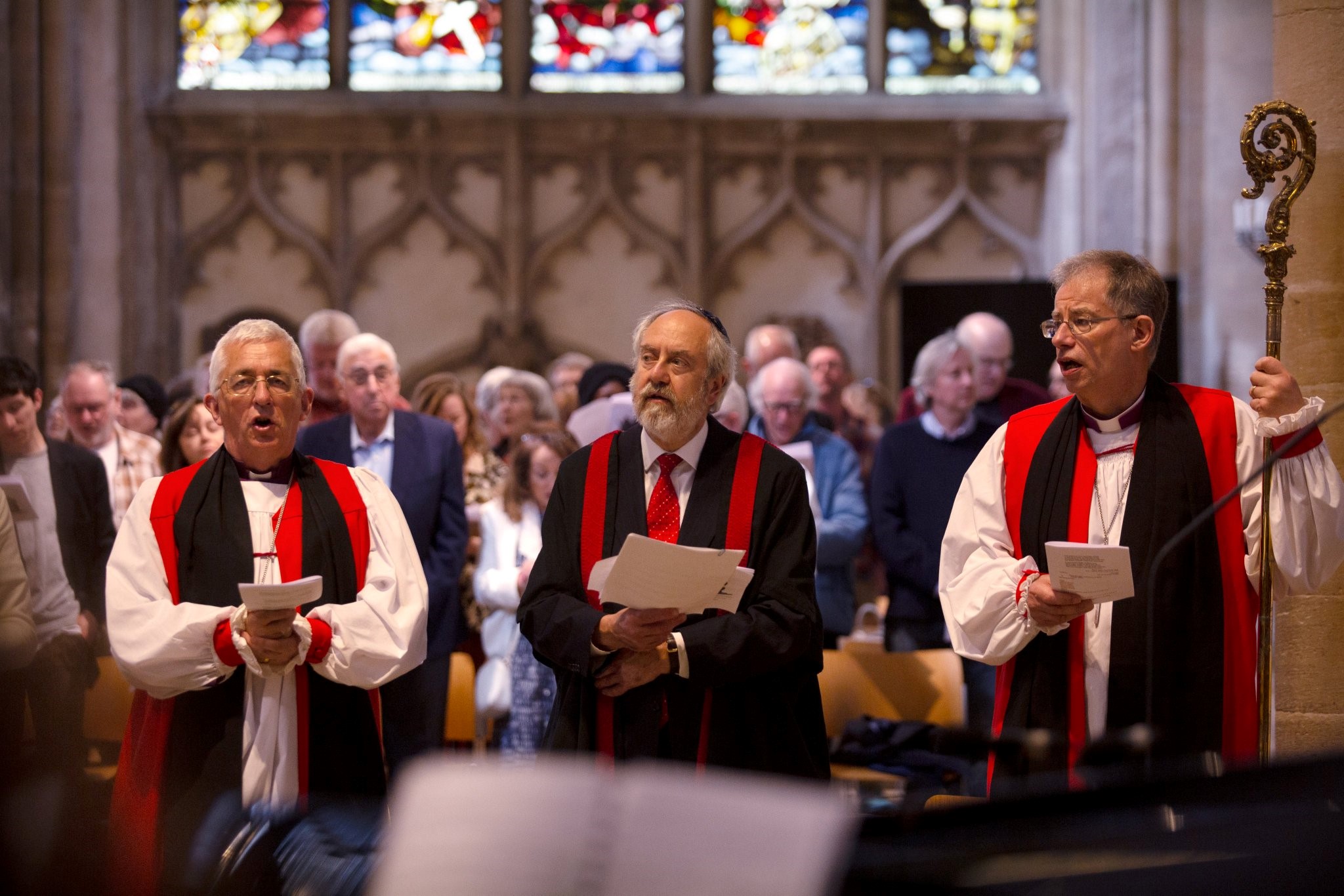 It is so important to be here, as Christians and Jews together, to mark the 800th anniversary of the Synod of Oxfordnote. Our being here has a national significance, as that Synod’s decisions shaped the whole of the medieval Church in England, and their inheritance belongs to all Christians who trace their history to that Church – particularly, Anglicans and Roman Catholics. But our being here is also local in its resonance: we are right by the centre of Oxford’s destroyed medieval Jewish community, and more positively today’s events are only possible because of the longstanding friendships between Jews and Christians in this great city and beyond.

Remembering is perhaps more difficult now than at any time in human history, because technology means that our capacity for storing information has become practically illimitable. But that makes remembering all the more crucial for us as humans: we cannot simply subcontract our memories to an electronic library. The purpose of memory is to shape our lives for the future through learning from the past.

Because biblical faith, Jewish and Christian, believes that God is present and active in human history, the Bible repeatedly emphasises the command ‘Remember’ as central to living in the way of God. Yet ‘remembering’ in the Bible can mean either of two rather different things. ‘To remember’ can mean to call back into the mind something that had fallen out; or it can mean to keep at the forefront of the mind something that had never been forgotten. It seems to me that, as we look back on the history of Christian-Jewish relations of which the Synod of Oxford is a part, Jews are mostly remembering in the second sense, and Christians in the first sense. That is to say, as Christians today we are turning back to face a reality which we have largely forgotten, whether deliberately or otherwise: the painful and shameful history of Christian denigration, exclusion and persecution of Jewish people. For Christians today’s event serves to remind us of something which should never have been forgotten. We need to learn from Jewish memories.

So for us as Christians remembering needs to lead to repenting. When plans to mark this 800th anniversary of the Synod of Oxford were first being discussed, there was some talk of the Church ‘issuing an apology’ to the Jewish community. And then people argued, how could or why should Christians of today apologise to Jews of today for something that happened eight centuries ago? And, some added, what did the Church of England think it was doing, apologising for something that happened before it even existed? But this is not so much a question of apologising: as a matter of repentance, which is described in the Church of England’s recent report God’s Unfailing Word like this: ‘Where the continuing effects of past sins by members of the one Body of Christ continue to be felt and where those sins have not come to an end, then members of Christ’s body here and now are bound to seek God’s mercy.’

That is where we are as Christians today: needing to recognise how our history has contributed to the ‘teaching of contempt’ which generated hostility towards suffering for our Jewish brothers and sisters; needing to recognise the legacy of that history still among us today; needing to seek God’s mercy. And that mercy needs to reach all of us, Anglican, Roman Catholic, or whatever part of the Christian church we belong to: however much people may argue over who is the rightful heir to the medieval Church in England, we are all inheritors of its shameful anti-Judaism.

God’s Unfailing Word goes on to say, of the proper sequel to repentance: ‘It needs to lead to a commitment to walk in newness of life, accepting disciplines of changed behaviour that follow from that.’ That brings me to the third point in my brief reflection, for which I want to use the word ‘rebuild.’ Again, this is a word with rich biblical resonances, from the physical reconstruction of city walls, through the reshaping of norms of action, to a commitment to establishing a better and more just world. In every dimension, though, there is an emphasis on taking responsibility for the future which God intends; and there is a recognition that we can only do this in partnership.

As foundations of our rebuilding project, we need a firm and right faith in the God of Israel, whom Christians believe to be also the God and Father of Jesus Christ. So much anti-Judaism and antisemitism can be traced back to distorted and mistaken Christian teachings; and one antidote to these evils must be a theology which takes seriously the witness of the scriptures to the God who first called the people of Israel to be a light to the nations. Christians will differ from Jews in the faith that we profess, in the religion that we practise, in the pattern by which we order our lives, and we should not be diffident or embarrassed about those differences. But we can no longer live by faith in isolation from one another; the distancing which the Synod of Oxford perversely sought has to be reversed.

So, as we rebuild our faith on firm foundations we need also to rebuild and deepen trust between Christians and Jews. The last six decades have begun to see a transformation in the ways in which our communities view one another, but there is still a long way to go, certainly from the side of Christians. Trust can only be won through building friendship, through learning about one another, through treating one another with respect, through facing difficulties and disagreements openly, honestly and courteously. At the Council of Christians and Jews, we are wholly committed to this great project of rebuilding trust; it is a challenging task which needs to be renewed in every generation.

But our purpose in rebuilding is not simply to get on with one another better (and, if it were, the Synod of Oxford would set a remarkably low bar for us to surmount). Both Jews and Christians understand ourselves to be in some sense responsible to God for more than our own communities. We are called to rebuild, or at least to repair, the world for God and with God. That is indeed a hugely daunting task, and in the current state of affairs we might be tempted to give up in despair. But we share the hope of the Kingdom of God, and we believe that the way we live our lives, the values we commend, and the messages we give are all designed to point to that Kingdom.

If that shared hope is to be more than vague aspiration or empty rhetoric, it must begin from facing realities as difficult as the decrees of the Synod of Oxford which we mark today. We must remember with clarity what happened and its impact; we must repent with sincerity for our turning away from the path of justice and mercy; we must rebuild in trustful partnership with one another. As Chief Rabbi Ephraim Mirvis has said, of the need to face our difficult history and its continuing influence in the present: ‘The importance of doing so is inextricably linked to the need to bear witness to the calamities of our past in a way that is just and true. More important still is the way that it impacts our conception of each other and the future we can create together, so that we may, in our fundamentally different but connected ways, be a source of immense blessing to our world.’ Amen to that.

Rt Revd Dr Michael Ipgrave is Bishop of Lichfield and Chair of Trustees at the Council of Christians and Jews.

Organised by the Diocese of Oxford, the service recalled the 800th anniversary of the 1222 Synod of Oxford. Held at Osney Abbey, this Synod instigated a particularly disturbing time in Christian-Jewish relations in England, with repercussions across Europe. In promulgating the decrees of the Fourth Lateran Council (1215), the Synod added a range of further anti-Jewish measures for the Medieval Church in England. The resulting canons forbade social interactions between Jews and Christians, established specific church tithes on Jews and imposed the need for English Jews to wear an identifying badge. These prejudicial laws were followed by further anti-Jewish statutes in the thirteenth century, culminating in the mass expulsion of the Jewish community in 1290. (Back to text)