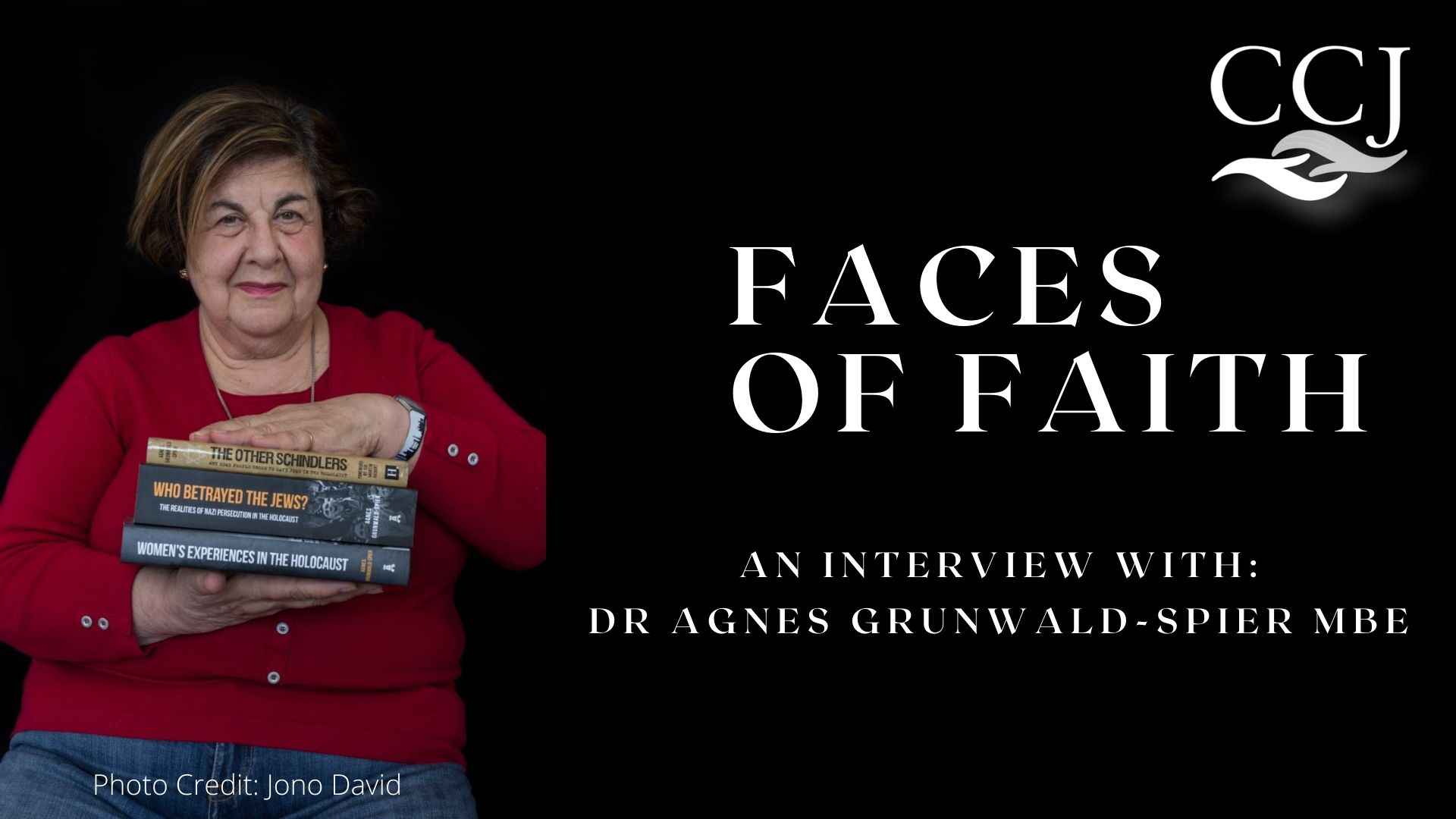 To launch our project ‘Faces of Faith’ we are honoured to share an interview with Holocaust survivor, historian and author, Dr Agnes Grunwald-Spier MBE. Agnes lives in London, where this interview took place.

“My Hungarian parents were married in Budapest in March 1942. At the time, Hungary wasn’t involved in the War. However, the Hungarians had introduced their own anti-Jewish legislation in the 1930s and it was extremely antisemitic. Hungary was the last country to be occupied, as Germans didn’t arrive until 19th March 1944. My father had already been taken away as a forced labourer in 1943 by the Hungarian fascists. As the Hungarian Jewish men couldn’t be drafted into the army, they were rounded up as forced labourers and treated incredibly badly - very few of them came back. Bizarrely, I did discover that my father came home on leave - around October 1943 - because my mother said that was when I was conceived. I was born in Budapest in July 1944.

My mother was left in Budapest when my father was taken away. She was living in the flat they rented on Kaplar Utca. Then, in June 1944, when she was heavily pregnant with me, she was forced to leave. The Jewish women were taken to what they called ‘Star of David' houses. It wasn’t yet the Ghetto - but you certainly didn’t have any choice about it. She went to a special clinic to have me, because, being Jewish she couldn’t go to the normal maternity hospital.

In between my birth and us being sent to the ghetto, my mother told me that she was told to report the next day. I don’t know what she knew about what was going on, but she was certainly fearful enough to try and leave me with her mother-in-law. Her own mother had died earlier in the war… But my grandmother said that as my mother was breastfeeding me, she didn’t know whether she would be able to provide me with any food. In the end my mother carried me in her arms the next morning, and all she ever said was - she wasn’t one for elaborating the tale – ‘the man in charge sent back the women with children.’ Who the man was, I don’t know. He could’ve been a Hungarian Nazi, he could’ve been a Hungarian policeman, he could’ve been a German Nazi. He could even have been a Jew, because the Nazis set up the Jewish councils in every major town and they ordered the Jews to do their dirty work, but I just don't know. But for him I might not be here talking to you. In November 1944 we were sent to the Ghetto. The Budapest Ghetto was set up in November 1944, and it was liberated in January 1945 by the Russians.

A relative of mine, Pali, was fighting with Tito, and was in Budapest when it was liberated. He told me he went to the ghetto and found my mother sitting on some steps holding me, surrounded by dead bodies. After that, she returned to her flat on Kaplar Utca. She had been away for six months, so whether anyone had been in there, I don’t know. She was there with me. Meanwhile, Russian soldiers were roaming around Budapest. At 8 Kaplar Utca, the Russian soldiers were running amok as elsewhere. My mother could see dinner services and linens and all sorts being chucked out of the windows. She heard the screams of women being raped. Three soldiers appeared in her flat. She was only small in stature, shorter than me, but my mother had that air of authority and the sense not to show that she was afraid. The soldiers didn’t speak Hungarian, and she didn’t speak Russian, but they sort of indicated they wanted something to eat and she in turn indicated that she didn’t have anything to cook. So the soldiers left and came back some time later with a frozen animal. My mother told me she thought it was a dog. Somehow, she cooked it, and they all sat and ate it together. I know she must have been fearful; after all, they could’ve hurled me out the window. Yet, as one of them was looking at me asleep, he sort of banged his chest and gesticulated that he had three children of his own. After they ate, the soldiers all went to sleep on the floor, and the next morning they left, without any trace of damage whatsoever. We were both very lucky.

Then, in March 1945, my father came back. To this day, I don’t know how. My mother had made up her mind that if she survived she would leave Hungary because of the antisemitism; she always said that the Hungarians were worse than the Nazis. My father wanted to go to Palestine, but my mother wanted to come to England to join her sister. My parents decided to leave Budapest. My mother was very concise - she said “we left on an illegal train, your father bribed the people”…

The train was headed to Vienna, where we stayed for just over a year as displaced persons, in the care of the United Nations. I went to kindergarten there and that’s where I first spoke. So my first language was German. In fact, I’ve never spoken Hungarian.

My parents bought a little house in Sutton in 1951. It was the cheapest house in Sutton. In the back of my mind is my mother’s voice saying it was cheap because there had been murder there - I don’t know whether it’s true or not, but after what my parents had been through one small murder was neither here nor there. Though my father did come back at the end of the war, he was very bitter and he wouldn’t have any more children. He said it wasn’t a world to bring children into. My mother said he felt as though the world owed him something. He committed suicide in 1955 when I was ten. Now, as I’m in the process of researching my family history, I can’t ask him all the questions I’d like to ask him.

I went off to university and eventually I got married when I was 24 and worked as a Civil Servant. I never read anything about the Holocaust, I never watched anything on the television, I just sort of thought I know what I know - and that’s enough for me.

I was aware of the fact that my teenage sons might ask me about the Holocaust, I didn’t really know any more than what I’ve told you – what my mother told me. I’ve always tried to be completely honest and upfront when they asked me about anything. It happened that, just as I was thinking about this, someone told me that they were doing a Masters in Holocaust Studies at Sheffield University, so I signed up and did that over two years, part time, and I thoroughly enjoyed it. I was in my mid fifties. It was just great. I had to write a dissertation, and it was the dissertation that really changed my life, because I wrote about a man called Varian Fry.

For a long time Fry was the only American recognised as a Righteous among the Nations. Educated at Harvard, he had been a journalist in the thirties and had witnessed the way the Jews were treated by the Nazis in Germany. In 1940, after the fall of France, there were a lot of Jews stuck in the south, and they couldn’t get out… A group of influential people in New York collected money to get those people away. They managed to ask Eleanor Roosevelt to persuade her husband to sign two hundred visas, but they still needed someone to go to Marseilles with these visas. Varian Fry, who by his own admission was not the stuff of which heroes were made, volunteered if no one else could be found. He was only intended to go for a month but he stayed for a year. It’s a bit difficult to know for sure how many people he saved, but probably over four thousand.

Writing about Varian Fry and a whole group of people that coalesced round him, fostered my interest in rescuers… So after I got my MA, I thought I’d really like to continue exploring this. Completing the MA had rekindled my interest in research. I was interested in the motivation of rescuers, because of the dangerous risk it involved. Over quite a long period of time, I collected thirty profiles of rescuers in ten different countries. With all of whom I’d either had contact with the rescuer, the rescued, or relatives, so I was able to ask the crucial questions of motivation, and discover what sort of people they were. After I had collated all this material, I thought there’s no point having all this information sitting in a filing cabinet. I tried to get it published, without any success.

Meanwhile, I was a lay member of the architects’ registration board for five years, and we were having an away day. The facilitator, a very interesting chap, a philosopher, rang each member of the board up to have a chat beforehand, to ask them about themselves and what they were doing. I told him about my research and how I wanted to get it published and he said ‘well I can help you with that’. He was as good as his word and put me in touch with his publisher, who said he’d see me. When I didn’t hear from the publisher after my first approach, I contacted him saying: ‘Can I take you out for lunch and tell you why my book is going to be a runaway success?’ He emailed me back saying, I am really busy, but come to the office. So I went to the office. When I left he said, by the time you get home, I’ll have sent you the name of two publishers, one of whom might help you. He was as good as his word.

I contacted the History Press, ten days later, on Friday afternoon, when I was very bored and fed up, a man rang me up and said “we’ll publish your book” and it was just amazing. I couldn’t believe it. I was sixty-five, and it came out in April 2010.

Agnes is now the Author of three books, ‘The Other Schindlers’ [2010], ‘Who Betrayed the Jews’ [2016], and ‘Women’s Experiences in the Holocaust’ [2018]. Agnes was a founder trustee of the Holocaust Memorial Day Trust, a member of the Board of Deputies of British Jews for fifteen years, a lay member of the Architects’ Registration Board and a Justice of the Peace for thirty years. Agnes was awarded an MBE in the 2016 New Year Honours List for her work as an HMDT Trustee and for ‘services to Holocaust awareness’. She also received two Honorary Doctorates in 2018 for her work on the Holocaust from Sheffield and Oxford Brookes Universities. She is currently researching her own family’s history for a Memoir.